Synod Oct 17: Moderator's introduction to the "View from 2025" paper

I don’t believe for one minute that the decline in the number stipendiary ministers that lies ahead of us is a sign that God has abandoned us! There is far too much evidence in our local churches of the work of the Holy Spirit in mission to say that!

Nor are the forecasts inevitable! Nothing is inevitable where God is concerned. If we grow and if God calls greater numbers of people to stipendiary ministry alongside our other ministries in the church, then things will change again - always with the proviso that our giving matches the up turn in vocations!

Importantly too, the document before us does not create the situation we find ourselves in, rather its purpose is to address our situation in the belief that good planning, is part of responsible discipleship. God call us to plan based on what we know whilst of course being open to a change in the direction of the Wind of the Spirit.

Neither is this paper intended to answer every question nor deal with all the issues arising from a reduced stipendiary ministerial team. Treat this paper as a background paper setting the scene for a resolution that will be brought by Synod Pastoral Group to the March Synod.

So of course, there are questions about lay leadership and training that will need addressing - that is already on the church’s agenda at a denomination wide level and our own Ministries Committee has a dedicated meeting next month to do some thinking about this important matter of lay leadership. There are ecumenical questions - for example, how will we serve our Local Ecumenical Projects if we have only 18 ministers - and a quick answer to that is that they would or could be part of this model either as Resource Churches or Resourced Churches.

So how do we keep ministry manageable, rewarding for stipendiary ministers, and how do we at the same time serve our local churches? Is it even possible? Well we have no choice but to try. 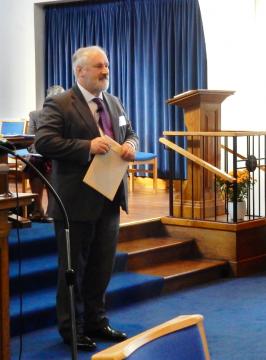 Broadly there are three options:

BUT East Midlands Synod has very few None Stipendiary Ministers few lay people with time and energy to serve above and beyond their elders duties as lay people on a fully fledged ministry team.

We also take the view that groups are a closed system model. Once they are set up and running, if they’re working well, they become hard to break open in order to expand or contract a group - because the group has developed its own group identity. This we see as a good thing when times are normal but not as helpful in the times we are heading into. Groups also don’t challenge us to thinking radically about what ministers are for - and we believe if we are going to avoid simply spreading ministers more and more thinly, radical thinking and action is required.

Large groups simply spread ministers thinly as they are the minister of every church in that group. Whatever we agree on as our way forward, we need a solution that is as flexible as it can be so as to be a future proof as we can be.

B) Then we have the model the paper sets before us - a model based on Resourcing.

It acknowledges that actually God has endowed us and blessed us with tremendous resources - in our people, many of our church buildings, sometimes finances, certainly experience and expertise.

This model calls some of our churches to see themselves as Resource Churches - strong enough to be able to share their resources with other churches in their area. Careful conversations would need to be had with churches Synod Pastoral Group identifies as possible R.C.s about what that would mean for them and what resources they have to share.

C) OR a model where we keep pastorates to no greater than three churches which may keep the job doable but leaves many churches without the input of a stipendiary minister either for ever or at least for many years. Synod Pastoral Group is not attracted to this option.

You’ll notice that the paper enumerates four models but the latter three are merely variants of model one which is the model expanded upon in the paper and the one we’re brining to you as commended by Synod Pastoral Group and Synod Enabling Group.

The great advantages of the Resource Model is that it still allows us to prioritise stipendiary ministry whilst serving all our churches. It re imagines the purpose and role of stipendiary ministers so that their time and energy remains effective. They will be a much smaller ingredient in the ministry mix but if we can re-imagine their role they will be like that seasoning in a stew - a small ingredient but that would be very noticeable if it weren’t there.

In the Resource Model, ministers would need to find ways of keeping in touch with Churches in Resourced Areas, eg regular conversations with church secretaries, attending as many elders meetings as is feasible, but at the same time they may chose to focus their attention on a small number of churches at any one time. This is the approach we are trialling with the ministry of Chris Ford in Nottingham. The resourcing part of their time would be spent working with lay leaders - elders, children’s and youth work volunteers, training lay leaders to conduct weddings and funerals with the help of the raining and Development Officer, leading time limited Bible studies, helping churches set up projects etc. We don’t wish to describe the role too precisely because that will make us all hostages to fortune. It will depend on the skill of the minister and needs of the churches at the time. However there would be a broadly based role description for Resource Ministry.

To enable us to call the right ministers, Synod Pastoral Group or whatever new structures that emerge from the Synod Review, will need to send people to visit churches in Resourced Areas to find out what current needs are. Church Profiles will be just as important as ever to help us in that task and will remain a critical part of the Local Mission and Ministry Review process.