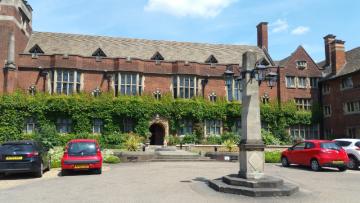 The Theme Leaders this year are

Roger Jones (Yes, the one who wrote all those musicals) who with the aid of three helpers, singer Ann, Violinist Annie and Clarinettist Amy is enabling us to explore the role of Music, Psalms, Hymns and songs in what makes worship work. The team is also leading our worship throughout the week.

Alan Spence, one of our ministers serving in Kent and incoming Chair of the national Faith and Order Committee, is leading us in Bible study on the theme of Feasts and Festivals. Starting with a look at two Jewish festivals: The festival of Purim and the festival of Tabernacles, he is asking about the Christian response to the texts that underlay these festivals.

Our Chaplain in Nigel Uden currently a minister in Cambridge, who was Moderator of the Southern Synod for two terms, and is incoming General Assembly Moderator. Nigel led our communion service on the final day using material from his workshops shaped to reflect the teaching from our to speakers.

There are several opportunities for the ever changing roll of Ministers in the Synod to meet and get to know each other socially, and time to stop and sit and reflect and pray.

Photo Gallery
Click on a picture to enlarge it.